The last time we spoke to Maxime Marotte he was in total lockdown. Like so many others, he was training at home with no idea about when he would be allowed outside again. Since then, he has gone back to his normal training routines on paths and trails. This Julbo athlete is getting ready for a 2020 season unlike any other; with a tightly packed sequence of races. Interview with the rider following “The Hidden Path”.

How did you feel on the 11th of May when you were finally able to venture out and ride some trails?

I felt such a release of emotion, as though I’d been let out of prison! Although the weather wasn’t great for this first week of freedom, I was so pleased to be able to ride outdoors. Mountain biking in the mud and rain was a massive change after long weeks on my home-trainer… Zwift® (an app that simulates riding with a community of cyclists on stationary trainers, editorial note) is good, but nothing can replace a real-life session on your bike.

I didn’t try anything technically demanding to start with, as I felt a bit rusty. In fact, my coach gave me free rein for those first few days to focus on enjoying myself and getting back in touch with how it feels to ride.

Other than a few key sessions, during those first two weeks I progressively got back into proper riding - exactly what I needed after two months on my home-trainer. For those weeks, it would have been a big mistake to do anything more intense.

The UCI recently announced its revised calendar. The world cup events are all squeezed into what will be a crazy two-month period. What are your thoughts on this?

I'm pleased with this news for a number of reasons. Firstly, because there’ll be almost as many races as initially planned, and also because I’m looking forward to the mental challenge of going through such an intense period Completing five world cup rounds and the world championship in just five weeks leaves no margin for improvisation. Two or three weeks of flat-out racing is relatively easy for the teams to manage, but beyond that, meeting all the requirements of the team as a whole could become overwhelming.

In this respect, I’m lucky to be part of a highly professional team with top-level expertise in performance optimisation. Every detail is thought through and I know that they will do a great job under these demanding circumstances. Trusting in their skills will be a key element in optimising my physical and mental recovery. And, of course, I’m very conscious of the fact that it will be a very intense time for them too. As soon as the season starts, they will have to work for almost fifty days in a row. This will be one more “one-off” to add to this unusual year.

The qualification race for the Tokyo Olympic Games has now been cancelled. How do you feel about this new situation?

To be honest, we still don’t know what selection criteria the French team will ultimately adopt. Without going into too much detail, I think that the race results from the end of 2019 will be included in the decision making. However, future races will no doubt be considered too, since the Olympics have been postponed for a year. This creates opportunities for other racers, and that really opens up the selection process. However, the best way to secure your ticket to Tokyo, is to show that you’re the best rider, in 2019 and in 2020.

2019 was a complicated year for me, but I feel I’m at my highest level, so I’m feeling reasonably confident about this situation. I just want to show that I deserve to be in the team. This competition for a place motivates me more than it makes me doubt my abilities.

There are still a few weeks to go before the season gets going again. What are your plans for this summer?

The main event is a road-trip around Scotland with Stéphane Tempier in June. But nothing is guaranteed these days particularly with some borders still closed. The important thing for me is to be able to take some time to get myself ready and to enjoy some relaxed riding. If this Highlands trip can’t happen, I’d replace it with a short road-trip that I’d treat as a personal training camp, not too far from home. I’d enjoy that a lot.

Whatever I do, I must make sure that I reach peak condition in August, so the summer’s going to involve a lot of hard work. The key is to structure my training efforts in a way similar to what we did over the winter, and then do event-specific work in July. That month looks like it’ll be intense, with several camps scheduled with my team, and with the French team.

In this third episode of The Hidden Path, it’s clear that you and your team pay careful attention to all the details which help to improve your performance ahead of the international season and the Tokyo Games, particularly with regard to this new bike. Are you also working on optimising products other than your bike?

We have made the most of the extra time that Covid-19 has added to our normal schedules to try out quite a few products. In addition to the bike, we constantly analyse every product we use and try to optimise it however we can. So, I test out a lot of products and feed back information to the manufacturers. With Julbo, for example, a lot of work goes into the lenses. My choice of one pair of glasses over another is dictated by the technological benefits they offer, as well as by the aesthetics; benefits that have been confirmed by trials in the field. For mountain biking, the Reactiv lenses are already really effective, and are particularly useful during this almost-summer period when you seem to be always riding in and out of tree-shaded areas.

But a key component of our search for marginal gains is to call into question accepted norms. A good example is how the wheel and tyre operate as a whole system. We are testing different tyre cross-sections with different rim widths in an attempt to determine which combination performs the best. It's a rotating mass, and the part of the bike where there’s most to gain in terms of performance, so it’s continuously under scrutiny. It kept us pretty busy over the winter, and we have plenty of other on-going projects. The strange thing is that - despite the postponement of the Olympic Games and the rescheduling of the international season - we are busier than ever! 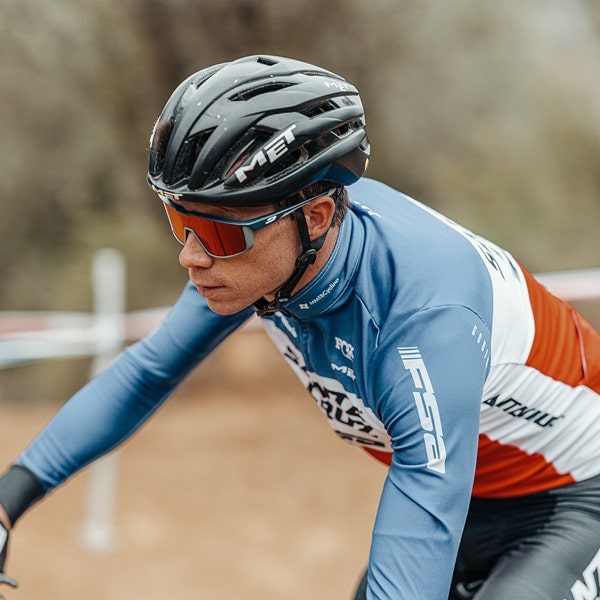