Members of the offshore racing and Olympic sailing elite have spent the last week at Julbo's headquarters. The program for their expedition included a factory tour, product development... and a cross-country skiing trip!

Clarisse Crémer, Paul Meilhat, Alan Roura, Jonathan Lobert, Jérémie Mion and Kevin Peponnet landed in Longchaumois on Monday, greeted by the heaviest snowfall of the winter. Julbo's HQ is located in this small town in the canton of Morez, the capital of French eyewear. Perched at 1416 meters above sea level, it's nestled in the mountains and bordered by forests, a long, long way from the sea... 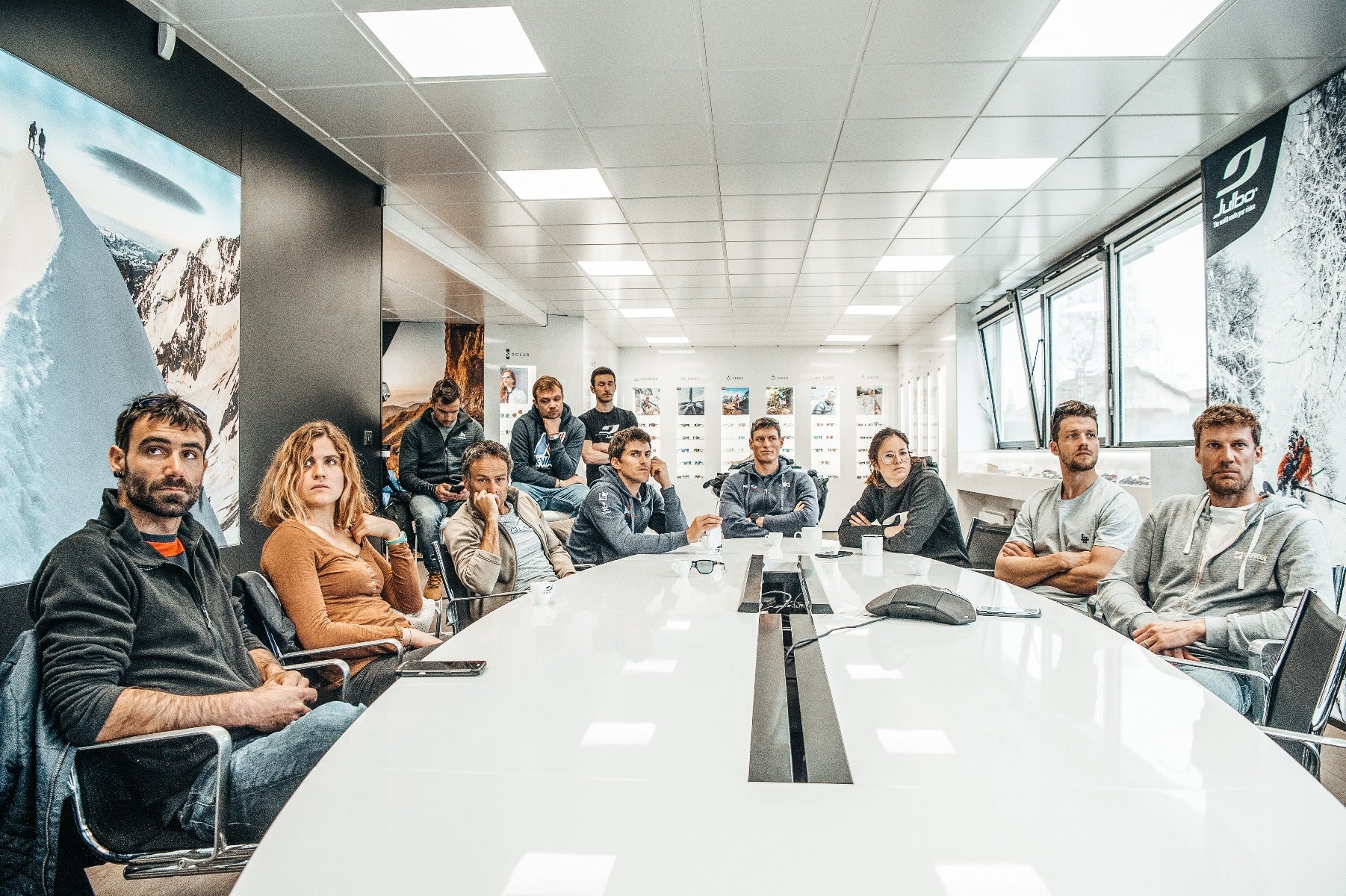 From the mountains to the sea

Originally specializing in protective sunglasses for crystal hunters, and then a pioneering producer of glacier glasses, Julbo is now an expert brand in optical and sun protection. It was at the end of the 90s that the company opened its eyes to the sea and established a reputation in the world of sailing: "It was a natural diversification for us," explains Christophe Beaud, Julbo CEO."Like mountaineers and skiers, sailors are really exposed to the sun, which can have the same damaging effect, whether on water or snow." 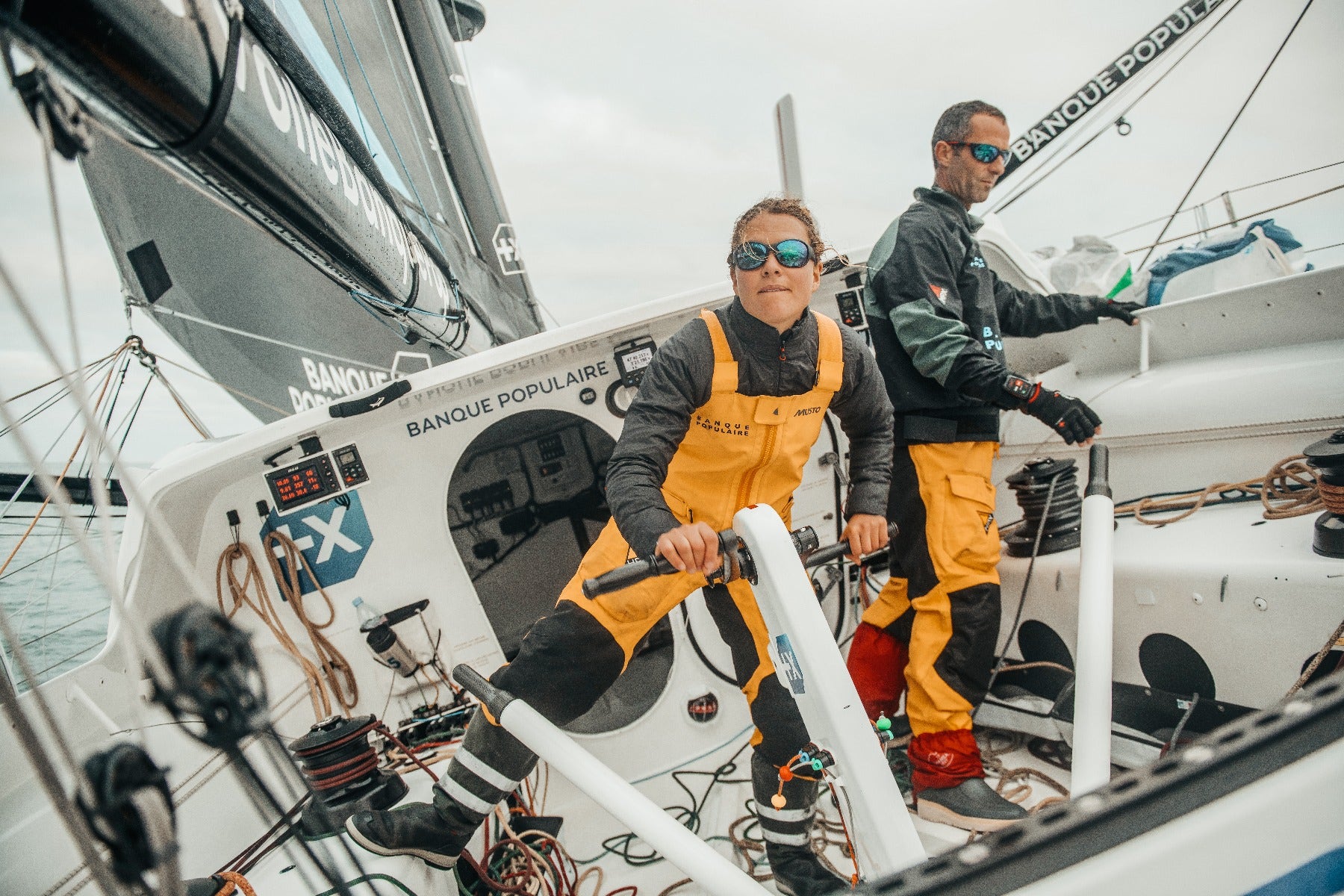 To conquer the sailing planet, Julbo applied the same (winning) strategy it has used for other outdoor sports: surrounding itself with the best athletes and being guided by their expert eyes. Franck Cammas was the first sailor to be sponsored in 1998, before other recruits joined the team: Armel Le Cléac’h, Samantha Davies and Charline Picon. With these athletes, Julbo built an image, gained a reputation and forged a track record worthy of the biggest suppliers of competitive sailing: Vendée Globe, Route du Rhum, Transat Jacques Vabre, Solitaire du Figaro, Volvo Ocean Race, the World Championships and Olympic Games... the "Made in Jura" sunglasses have won everything! 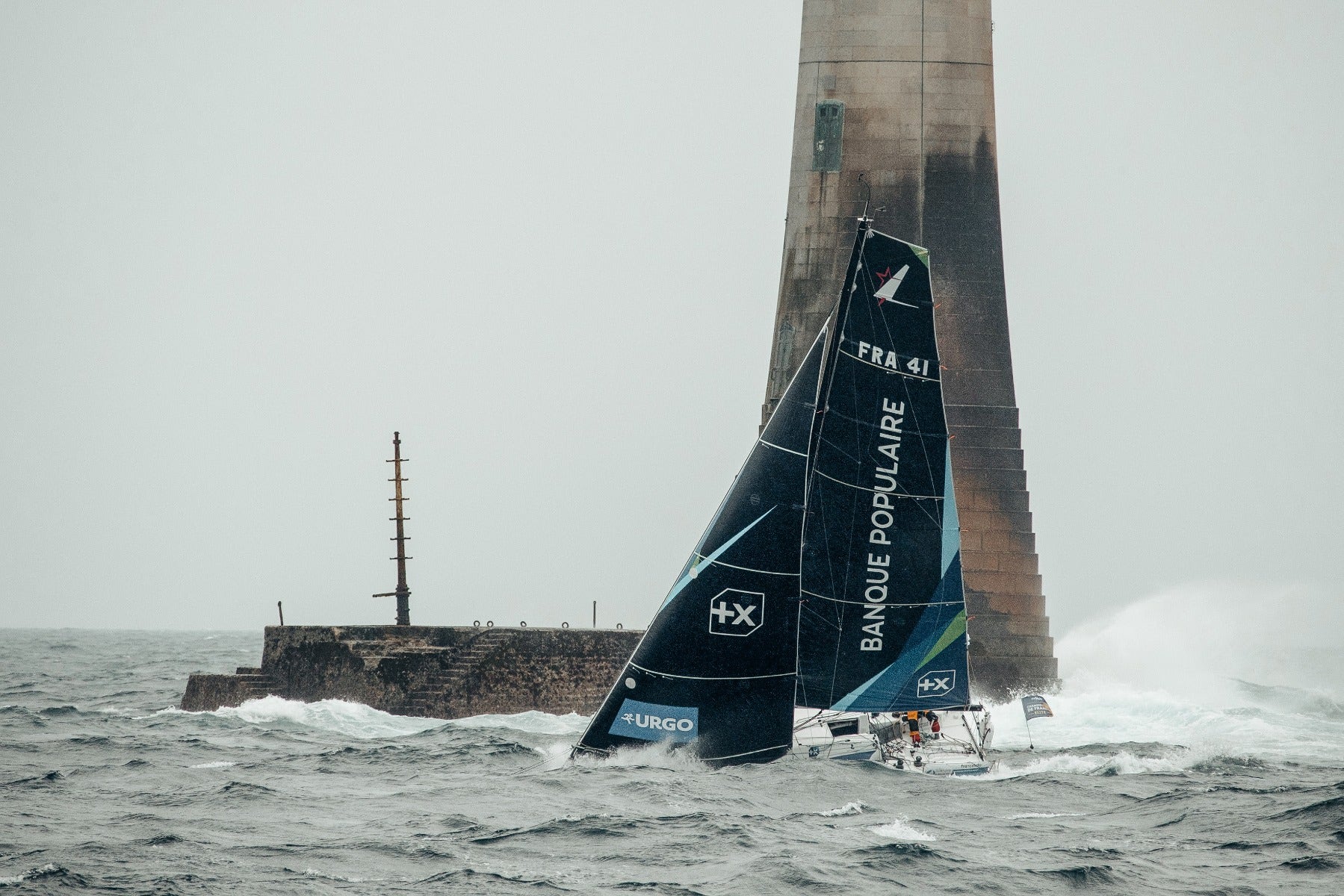 This long-standing collaboration between Julbo and its athletes, fueled by a passion for sport, a taste for adventure and a shared vision of freedom, pushes the brand to innovate so it can meet the needs of the most demanding athletes. "Close relationships are a basic value for us," says Christophe Beaud. "This is what guides our work with our athletes." As happened today in Longchaumois, surrounded by product managers and designers, they are regularly asked to give their opinion on Julbo sunglasses so they can be constantly improved. This valuable feedback from skippers has, for example, allowed Julbo to design frames with flush lenses so that water runs off more easily.

Jérémie Mion:"Sunglasses are a key part of our performance. So knowing that the Julbo teams are listening to us and paying attention to the tiniest detail is great because the products change quickly, and are adapted to our needs and the particular challenges we face on the water." 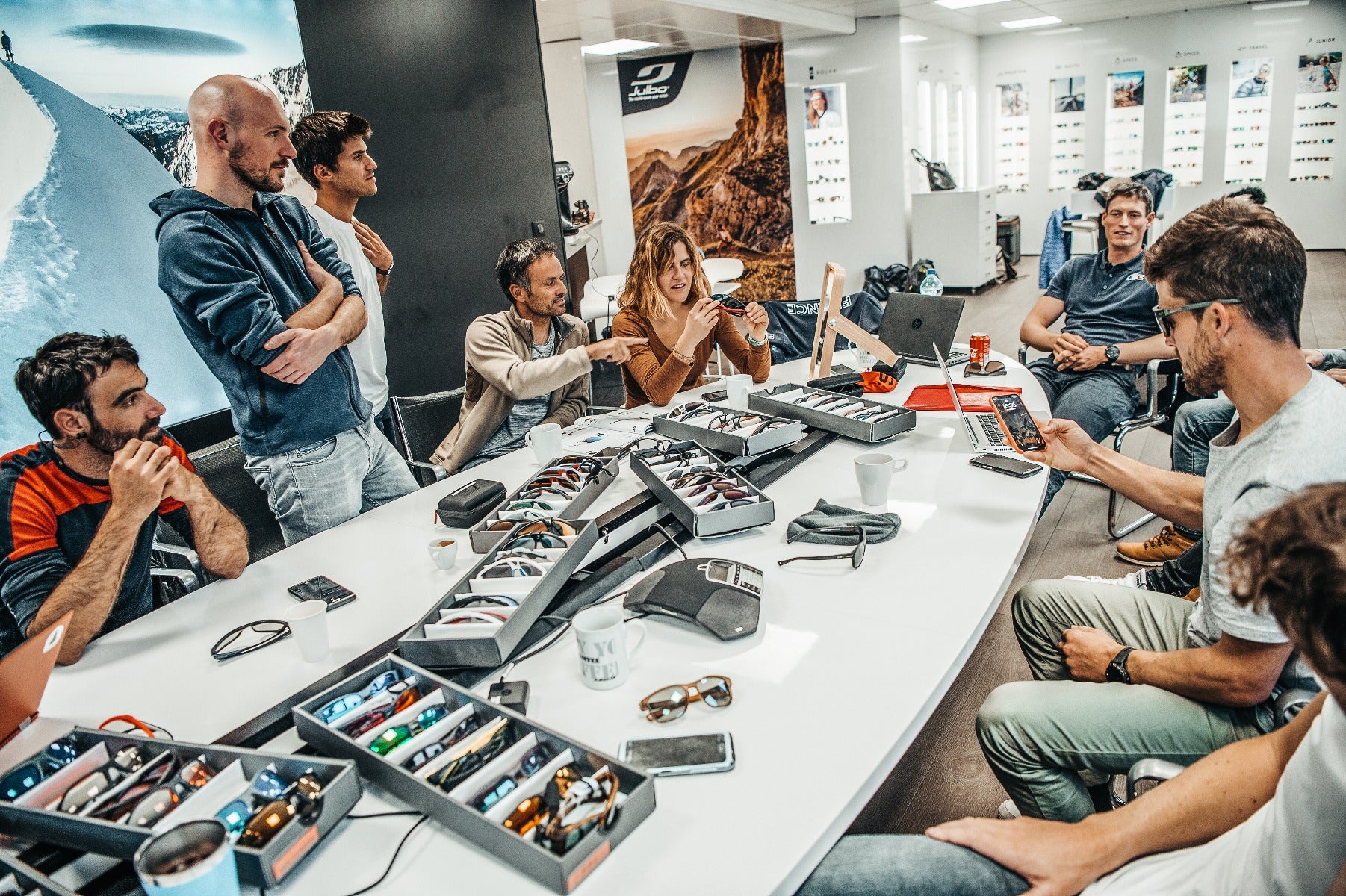 Discovering a unique form of know-how

This time, the opportunity was too good not to go further. By tacking into the Jura, the six professional sailors had the chance to visit the factory, meet employees and learn about the company's unique know-how dating back 130 years. "It was really interesting to learn about the glasses manufacturing process from A to Z, the machines, the tools and so on. And behind all that, you get a real sense of a wonderful and long-established history," says Clarisse Crémer. "I found a real family business," explains Alan Roura. "Employees work really closely with each other. And that's what makes Julbo such a strong company."

For Paul Meilhat, 2018 winner of the Route du Rhum, "there's a real parallel with boats: sunglasses are made in molds, there are designers, a design office, etc. It’s another world, but just as fascinating!" The skipper, frustrated at not being able to take part in the Transjurassienne race which was canceled this year, is also waiting for "(his) revenge"... 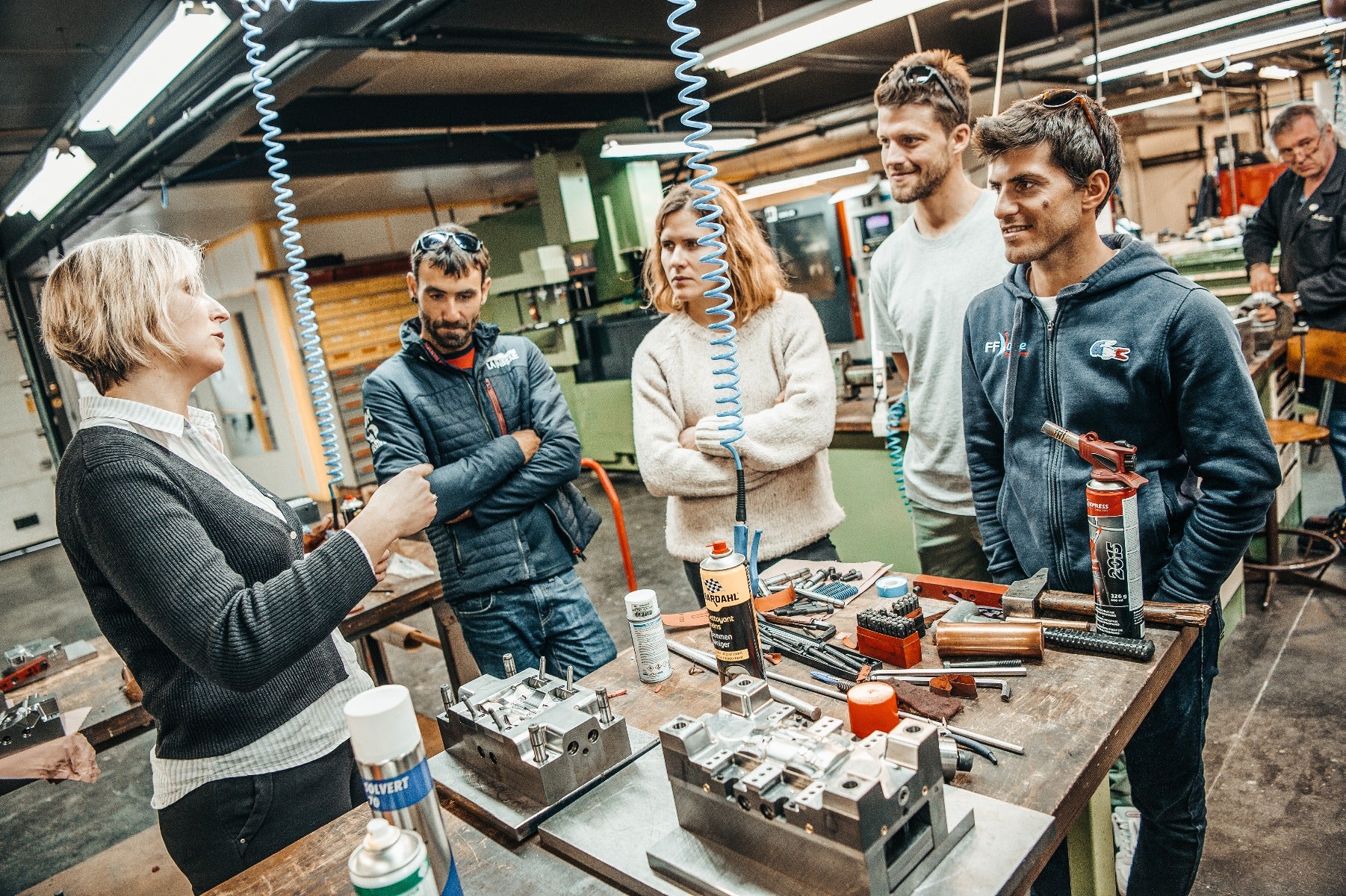 Taking full advantage of their stay in the Jura, Clarisse, Paul, Alan, Jonathan, Jérémie and Kevin were also introduced to cross-country skiing on Tuesday morning, following the lines of Clément and Flavien, two Julbo employees. They took a 15-kilometer route through the Risoux forest, a Nordic skiing paradise, which they're unlikely to forget: "It was great, the snow was perfect and the scenery stunning," said Jonathan Lobert. It was also ideal training to prepare for upcoming competitions, starting with the 470 world championships for Jérémie Mion and Kevin Peponnet, from March 13 to 21 in Palma, Spain. "We hope to make the Julbo team shine there," says Kevin. An ambition that's definitely within sight. 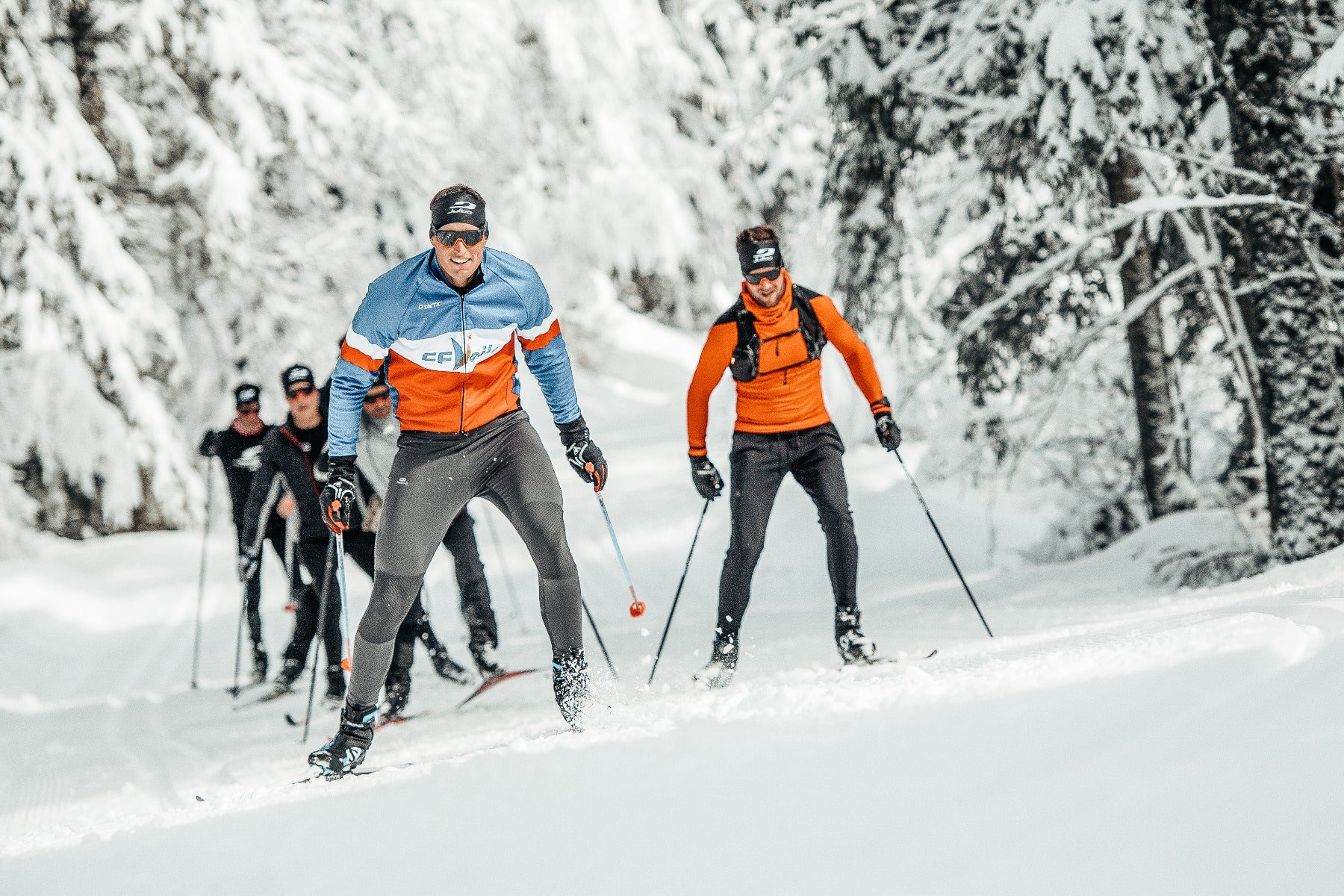 The skippers in brief:

Clarisse Crémer: age 30, professional French skipper, at the helm of the Banque Populaire X IMOCA monohull, and a future participant in the Vendée Globe 2020-2021.

Alan Roura: age 27, professional Swiss skipper, at the helm of the La Fabrique IMOCA monohull, the youngest sailor to complete the Vendée Globe in 2017 (at the age of 23), and a competitor in the next edition.

Jonathan Lobert: age 34, a member of the French Olympic sailing team in the Finn category, 2017 European champion, two-time runner up in the European championships (2015 and 2017), and a bronze medalist at the 2012 Olympic Games in London. 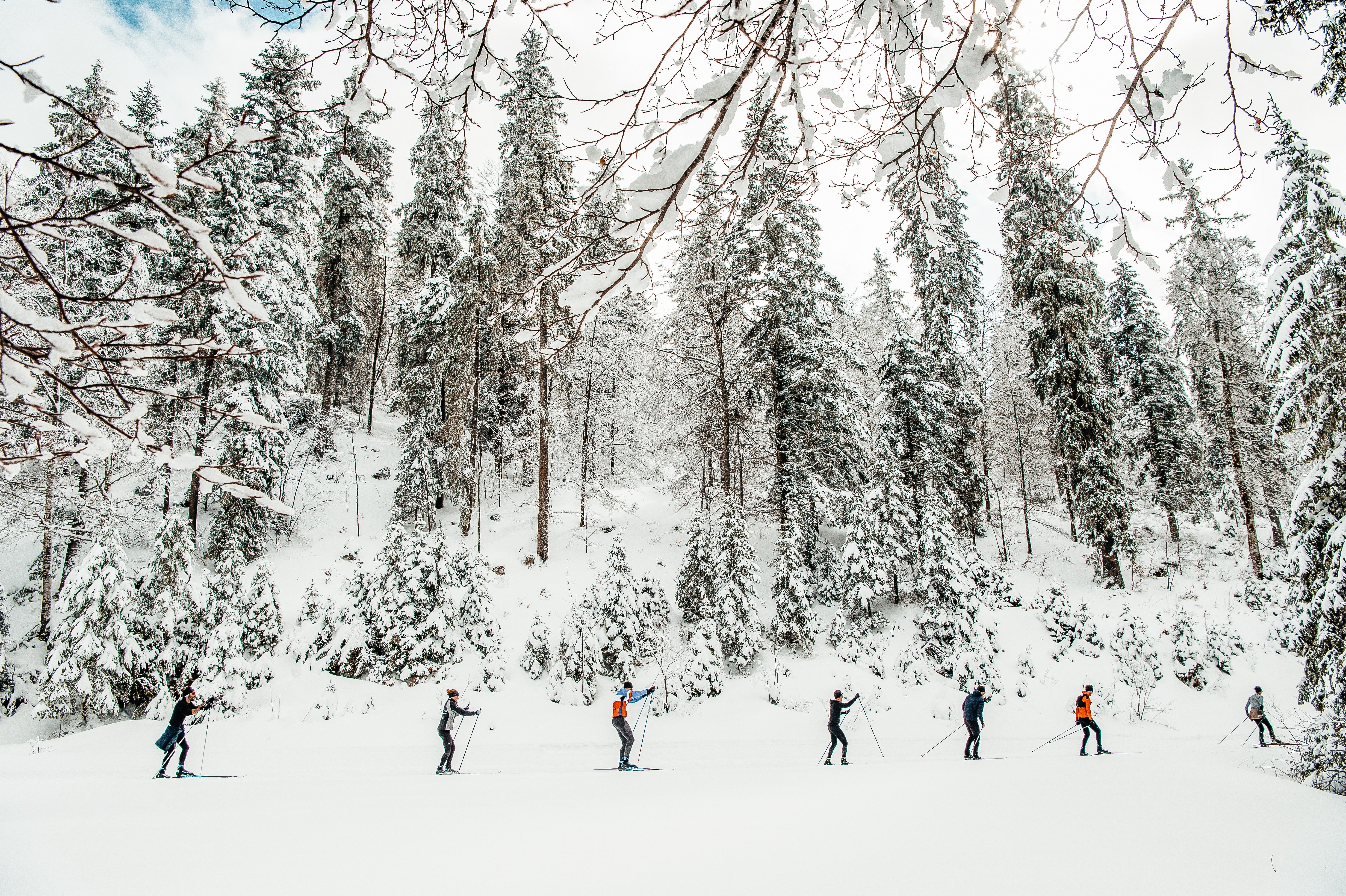