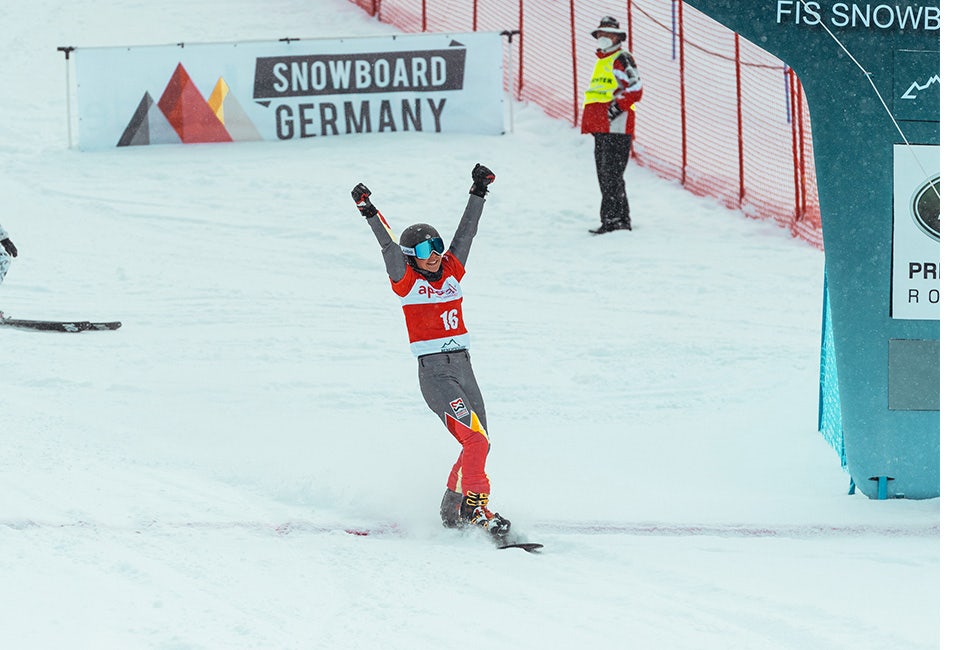 Following the retirement of the successful snowboarders Selina Jörg and Cheyenne Loch at the end of last season, it’s now up to the second-string athletes to step up and prove their mettle. This applies to no-one more than Carolin Langenhorst, a bronze medal winner at the Junior World Championships in 2016 who also achieved a World Cup second place in Rogla in 2017. By finishing third in Bannoye, Russia, in this year’s World Cup, she has laid the foundations for success, qualifying for the 2022 Winter Olympics in Beijing.

The Team Snowboard Germany competitor was born in Hamm, northern Germany, on 3 February 1996 and grew up in Berchtesgaden. She followed her older brother into snowboarding and soon fell in love with the sport, working her way up to world-elite level in the disciplines of parallel giant slalom and parallel slalom. Carolin, who is an army-sponsored athlete, is currently living in Munich, where she is studying educational science at LMU. During the first coronavirus lockdown, she proved beyond doubt that she has a social conscience. On a whim, she volunteered to help at the telephone advice centre in the healthcare department in Bad Reichenhall. “Instead of sitting around at home, I decided to do something to use my brain that would also benefit society.” For this initiative, she was awarded the 2020 Bavarian Sports Prize by the Bavarian Minister of the Interior and Sport, Joachim Herrmann.

AIMING FOR A TOP-8 OLYMPIC FINISH

Besides snowboarding, Carolin has a penchant for baking, mountain climbing, surfing and acrobatics. She describes herself as someone who thinks first and acts later, which can sometimes be a disadvantage when it comes to snowboarding. She is incapable of taking the plunge without thinking things through first. This annoys her and she wishes she could change. Carolin, who turns 26 next month, has a pre-race ritual: she crosses herself at the start. Perhaps this will help her at the Beijing Olympics too. She is starting to feel the pressure. “We now have to start delivering,” says Carolin. “The trainers are trying to keep the pressure away from us, and we can’t help but get caught up in it, and we’re keen to get stuck in and deliver. We’re on the right track and all geared up for it."

Whether that will be enough for a podium place she’s not sure – but she would like to finish in the top eight. In the 2018 Winter Olympics she came ninth, and in 2022 she hopes to improve on that. At Julbo, we’ll be rooting for her!